Another Dr. Oz Show topic makes “The Whistle Blog.”   What is he promoting now?  Well, not surprisingly, another dietary supplement.  This time the “miracle pill” and “magic pill”  (he used these two adjectives to describe the supplement)  is GREEN COFFEE EXTRACT.  Let’s talk reality about this “amazing discovery.” 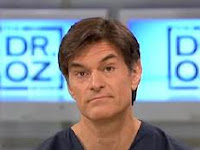 ****The study was funded by Applied Food Sciences, which makes the green coffee antioxidant supplement.

Number of participants in the “staggering study?”   16
Length of the study? 12 weeks
Did  the study represent adults of all ages?  The participants were 22-46 years of age


Quote from Joe Vinson, professor of chemistry at the University of Scranton, “We don’t think it’s the caffeine in it.”
What was the weight status of study participants….”they were obese.”  “They did not change their diet during the course of the study...  average 2400 calories/day. They WERE physically active burning over 400 calories/day with exercise”.*
***Please note that 2400 calories/day with a 400 calorie exercise burn is not a typical intake for an obese adult. A 2400 calorie dietary intake with 400 calories of exercise burn is typically a weight loss diet for an obese adult.”
Another Vinson quote: Vinson can’t say for sure why the coffee bean extract seems to help weight loss.  He suspects “one explanation is the unroasted beans’ chlorogenic acid.”

There does not appear to be any strong evidence that taking green coffee bean extract.   Dr. Oz’s guest recommends 800mg twice a day (nice income for Applied Food Sciences, the company who funded this study).  I’ve read that caution should be used in consuming green coffee bean extracts as they may contain high levels of caffeine as well.
I’ve also read some information about a 2006 study in which green coffee bean extract in a very low dose (140 mg) administered to hypertensive subjects resulted in a significant reduction in both systolic and diastolic blood pressure levels, without any observed side effects.  Dr. Oz’s guest presenter recommended 1600mg/day.
When the dust settles and all is said and done, green coffee extract may be a great antioxidant like the antioxidants in many other fruits and vegetables.  Does there appear to be any reason to start using it regularly at this point?  No.  Was this a staggering study?  No.  Is green coffee extract a “miracle pill” or “magic pill” (Dr. Oz quotes).  No

Diane Kress, RD CDE
Diane Kress, RD CDE is a registered dietitian, certified diabetes educator, owner and director of her private practice: The Nutrition Center of Morristown in NJ, and has over 30 years experience specializing in metabolic syndrome, pre diabetes, type 2 diabetes, and weight reduction. In 2013, she was named a Top 10 Registered Dietitian of the Year in "Today's Dietitian Magazine". She is also the author of three major books: THE METABOLISM MIRACLE is a New York Times bestseller now licensed in 7 languages. THE METABOLISM MIRACLE COOKBOOK is the complementary cookbook that contains recipes for The Metabolism Miracle and The Diabetes Miracle. THE DIABETES MIRACLE contains her world famous core Miracle diet/exercise program tailored for the prevention and treatment of type 2 diabetes. Learn more about Diane Kress…and her philosophy that Knowledge is Power…Truth in Health: www.themetabolismmiracle.com (blogs here) www.thediabetesmiracle.com (blogs here) www.dianekress/wordpress.com (blogs here) www.OneTouch.com/dtime Subscription Website for all followers of The Metabolism Miracle and The Diabetes Miracle: www.miracle-ville.com.